By Redevelopment Authority of Bucks County
Posted May 10, 2018
In Brownfield Sites
Riverfront North2018-05-102018-08-21http://www.bcrda.com/wp-content/uploads/2018/05/bcrda_logo_full_web.pngThe Redevelopment Authority of the County of Buckshttps://www.bcrda.com/wp-content/uploads/2018/04/modern-office-building-with-night-blue-sky-psndmpr.jpg200px200px

Riverfront North is a 52-acre site located on the Delaware River in Bristol Borough. The site has a long industrial history, including functions as a shipyard and trash transfer station. A portion of the property operated as a zinc manufacturing plant, which ceased operations in 1986. The most recent industrial occupant, the Dial Corporation, manufactured soap products at the site until closing its doors in 2001. Following closure of the zinc plant in 1986, Bristol Borough and the Redevelopment Authority envisioned a sweeping change of uses at the rundown and underutilized waterfront property. The Redevelopment Authority ranked the site as the number one priority in the inventory of brownfield sites in the Enterprise Zone of Bucks County. The idea was to revitalize the area and change the usage from industrial to residential and office. Additionally, the site’s waterfront location, within walking distance of Bristol Borough’s commercial district, represented an opportunity to attract visitors, create public spaces, and spur revitalization of the downtown.

From 1986 to 1988, the Redevelopment Authority worked with Bristol Borough to begin acquiring parcels of property at the site through eminent domain. In 1998, the Redevelopment Authority secured a grant from the Pennsylvania Department of Community and Economic Development (DCED) for an environmental assessment of site conditions. A U.S. Environmental Protection Agency (EPA) brownfields pilot grant served as a match. Bristol Borough also contributed to assessment costs. Following completion of the assessment, the Redevelopment Authority created a development and marketing plan consistent with the cleanup standard that the property could meet. The work plan was approved by the Pennsylvania Department of Environmental Protection (DEP) through the state’s Land Recycling Program. A 13-acre parcel at the northern section of the site was targeted for cleanup to residential standards under Act 2.

With environmental conditions identified, site remediation commenced. DCED contributed a $862,567 grant for site remediation. The Redevelopment Authority secured additional funding for demolition of concrete foundations. Bristol Borough provided a 25-percent match for these grants, as well as $220,000 for remaining demolition costs. Remediation efforts initially focused on the 13-acre parcel at the northern section of the site designated for cleanup to residential standards. Due to community interest in limiting the impacts of redevelopment on schools, the Redevelopment Authority issued a request for proposals to develop the property into age-restricted owner-occupied housing. By 2001, Riverbirch Developers completed construction on a 56-home retirement community and all homes were sold within one year of groundbreaking.

Also in 2001, the Dial Corporation closed operations at the site. The Redevelopment Authority purchased the Dial property, which included 9.9 acres at the southern section of the site and all buildings, for $2 million. To cover purchase costs, the Redevelopment Authority borrowed $1.5 million from Bucks County’s Community Development Block Grant fund and secured a $600,000 loan from a private bank. Assessment and remediation of the nonresidential section of Riverfront North continued with state funds covering 75 percent of assessment costs, and the EPA supplying the balance. The Redevelopment Authority obtained a $720,000 revitalization grant for building demolition. In 2002, Bucks County assisted in obtaining a $2.5 million Section 108 loan for remediation. In addition, the Borough of Bristol secured a $2.3 million US Economic Development Administration (EDA) grant for site improvements and infrastructure installation.

In June 2003, Preferred Real Estate purchased from the Redevelopment Authority a parcel at the southern section of the site with plans to renovate the Dial Soap warehouse and develop three pad sites for office buildings, as well as an additional 120,000 square feet of Class A office space. The Dial building is listed on the National Register of Historic Places; renovation of the historic structure provided $2.1 million in tax credit funding. In addition, the site’s location within the Enterprise Zone of Bucks County qualified it for a $250,000 Neighborhood Assistance Program Enterprise Zone Tax Credit. The completed project combines the historic building and new construction as a Class A office complex entitled Island View Crossing. In 2006, the Lenox Corporation, manufacturer of china and gifts, announced that it would locate its worldwide headquarters at the rehabilitated former Dial Soap warehouse. The Governor’s Action Team provided Lenox with an incentive package, including $600,000 in opportunity grants, $250,000 in customized job-training funds, and $495,000 in job-creation tax credits to secure the deal.

Riverfront North is now home to a thriving community, hundreds of new jobs, and a revitalized waterfront with trails and boat access. The residential neighborhood at Riverfront North is flourishing, with over 100 permanent residents and homes valued at twice the original purchase price. In May of 2006, Lenox became the anchor tenant of the Dial Soap building, occupying 126,000 of the 183,000 square foot site. The move created and retained more than 470 jobs. The walk and landscaping for the Rail Spur Park Walk is now complete, providing public access to the Delaware River riverfront. Before redevelopment, the 13-acre parcel at the northern part of the site generated no real estate taxes. Today, each of the new housing units provides more than $4,000 in annual property taxes to the borough, school district, and county for a total exceeding $250,000.

Recent Posts
About Us 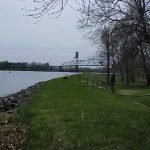